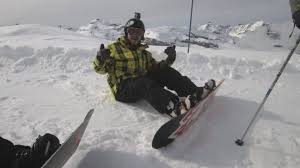 A man who lost his lower right leg seven years ago when he was hit by a car has set his sights on becoming a Paralympic snowboarder.
Lewis-born Andy Macleod had been cycling to a friend's house when he was thrown more than 60m (196ft) into the air in the crash in Fort William.
He required months of hospital treatment and also rehabilitation for a brain injury.
Andy is snowboarding with use of a prosthetic limb.
At the time of the crash in March 2011 he was 18 and a university student.
The outdoor pursuits enthusiast had taken up snowboarding just months earlier.
Andy, who was born in Stornoway and grew up in Stirling, said: "When I first went to university everyone was a snowboarder or a skier, and I was so excited to get involved.
"I picked up a snowboard in my first year and felt like a natural."
Recalling the crash that caused him life-changing injuries, he said: "My leg was amputated on impact with the vehicle and I don't remember anything about the accident, that whole day or two weeks after."
The driver of the car was later jailed for 10 months for dangerous driving and banned from driving for three-and-a-half years.ia
Andy's recovery has included receiving care from Dorset Orthopaedic. It has helped him with the fitting of prosthetic limbs, including one for use with a snowboard. Through involvement with Disability Snowsport UK he was introduced to the GB Para Snowsport team.
Following an evaluation by the team, he was successful in qualifying for the home nations' academy in the sport of snowboard cross racing.
Andy is currently in Austria taking part in a six-week training camp which will help him prepare for competitions later this year.
His goal is to be selected for the 2022 Winter Paralympics in Beijing.

Find words of phrases in the text that correspond to the words and definitions given.