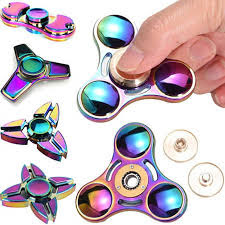 Florida-based creator Catherine Hettinger couldn’t afford the patent on the ubiquitous playground toy but insists she’s ‘pleased’ about its sudden popularity. However, she should be enjoying the high life.
But the Florida-based creator is not making a penny off her genius invention, even as global sales of the gadget she envisioned two decades ago as a way to entertain her seven-year-old daughter soar into the tens of millions and suppliers struggle to meet massive demand. Hettinger held the patent on finger spinners for eight years, but surrendered it in 2005 because she could not afford the $400 (£310) renewal fee.
Now, while the manufacturers and retailers who are selling the modern-day versions of the toy rack up huge profits, Hettinger, 62, is moving from her tiny house to a cheaper condo, wondering whether to get her disconnected telephone line reinstated, and figuring out how to afford “a car that truly works”. “It’s challenging, being an inventor,” she told the Guardian.
“Only about 3% of inventions make any money. I’ve watched other inventors mortgage their houses and lose a lot. You take roommates, you get help from friends and family. It is hard.” Hettinger accepts that had she been able to afford to keep the patent, she would now likely be sitting on a sizeable fortune. “I wouldn’t have any problem. That would have been good,” she said.
The palm-sized spinners consist of a ball bearing which sits in a three-pronged plastic device which can then be flicked and spun round. Some schools in the UK and the US have banned the devices, but some teachers believe that they can help children concentrate – especially those with ADHD (Attention Deficit Hyperactivity Disorder).
“There’s just a lot of circumstances in modern life when you’re boxed in, and we need this kind of thing to de-stress. It’s also fun. That’s the thing about culture, once everybody starts doing it, it’s kind of OK.”
Her views are not shared by increasing numbers of schools, who are banning children from bringing or using the spinners because they are seen as a distraction. But Hettinger said she was pleased that in other circumstances, schools were finding the devices helpful. “I know a special needs teacher who used it with autistic kids, and it really helped to calm them down,” she said.

Question 1: [2,5 POINTS] Indicate whether the following statements are true or false and                 write down which part of the text justifies your answer.

1. The fidget spinner has always been very popular.
2. The design of the spinner has changed over the time.
3. Catherine is having problems to pay for her house.
4. Being an inventor is profitable.
5. Not everybody sees the spinner as beneficial.

Question 2: [1,5 POINTS] Find words or phrases in the text that correspond to the words     and definitions given.

Question 3: [2 POINTS] Choose the most suitable answer (a, b or c) according to the text and write down the sentence
1. The fidget spinner...
a. was thought to be a money maker.
b. was meant to be an entertainer for kids.
c. was created for autistic children.

3. When something becomes very popular...
a. it is widely accepted.
b. people get money out of it.
c. inventors pay a patent.

4. The fidget spinner....
a. is sometimes thought to help children relax.
b. is always considered distractive.
c.is said to cost a lot of money.

Question 1: [2,5 POINTS] Indicate whether the following statements are true or false and                 write down which part of the text justifies your answer.
a) FALSE “its sudden popularity”
b) TRUE “the modern-day versions of the toy”
c) TRUE “Hettinger, 62, is moving from her tiny house to a cheaper condo”
d) FALSE “Only about 3% of inventions make any money
e)  TRUE “they are seen as a distraction”
Question 2: [1,5 POINTS] Find words or phrases in the text that correspond to the words     and definitions given.

Question 3: [2 POINTS] Choose the most suitable answer (a, b or c) according to the text.