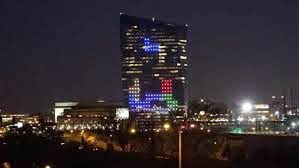 Hundreds of Tetris fans got to play a super-sized version of the popular interlocking shapes game in the  city of  on Saturday.

The 29-floor Cira Centre, which has hundreds of LED (light emitting diode) lights embedded in its glass facade, normally displays colourful geometric patterns at night. But on Saturday, images of Tetris shapes fell on two sides of the mirrored tower as competitors used joysticks to manoeuvre them into place.
Organisers hope it inspires onlookers and players to think about the possibilities of technology. It also celebrated the upcoming 30th anniversary of Tetris, a game revered as the epitome of elegance and simplicity, said Frank Lee, the game designer who oversaw the creation of the giant display.
Lee, a digital media professor at , already holds the Guinness World Record for the world's largest architectural video game display for playing Pong on one side of the Cira Centre last year. "This project began as a personal love letter to the games that I loved when I was a child - Pong last year, Tetris this year. But it ended up as a way of uniting the city of ," said Lee.
Pong, one of the earliest video games, was developed by Atari in 1972. 12 years later Tetris was created by Russian computer programmer Alexey Pajitnov. The game challenges players to rotate and arrange falling shapes into complete rows and then it became a global phenomenon in the late 1980s after game designer Henk Rogers, who had seen Tetris at a trade show in Las Vegas, acquired the rights and struck a deal to put it on Nintendo's original Game Boy.

Question 1 (2 points) Indicate whether the following statements are true or false and write down which part of the text justifies your answer.
a. The game was reflected on the building as a real game.
b. This super size game was intended just for fun.
c. There have been more game shows at the Cira Centre.
d. Tetris was a successful game from the start.

Question 2 (2 points) Answer the following questions in your own words.
a. How does the game of Tetris work?
b. Why was this project originally started?

Question 3 (1.5 points) Find words or phrases in the text that correspond in meaning to the words and definitions given.

Question 4 (1.5 points) Complete the following sentences without changing the meaning.
a. The 29-floor Cira Centre normally displays colourful geometric patterns at night.
Colourful...
b. "This project began as a personal love letter to the games that I loved but it ended up as a way of uniting the city of ," said Lee.
Lee said that...
c. Tetris became a global phenomenon in the late 1980s after game designer Henk Rogers acquired the game rights.
If Henk Rogers...

Why do you think video games are so popular?
Publicado por Self-Access Group en 20:14