Man fights off shark, stitches up own leg, goes to the pub 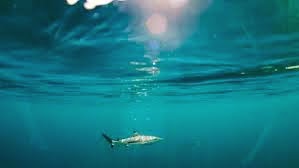 A junior doctor has recounted how he fended off a shark attack and stitched up his own wound on the beach before enjoying a pint of beer at a nearby pub.James Grant was spearfishing with friends near Colac Bay at the base of New Zealand’s South Island on Saturday when he was attacked by what he believed was a sevengill shark.The 24-year-old was in about (6ft) of murky water when he felt a tug on his leg, which he initially thought was a friend playing a trick on him. "I looked behind to see who it was and got a bit of a shock," he told Radio New Zealand.He didn't see the shark and had no idea how big it was, he said, adding that he thought it could have been about 20cm (8in) across the jaw. However, he felt no fear. "[I thought] bugger, now I have to try and get this thing off my leg," he said.
He already had a knife in his hand and stabbed at the shark. "I am not sure how effective it was. I guess it let go so something must have happened. [I] put a few nicks in it."He quickly made it on to rocks on the shore, where he took off the wetsuit – borrowed from a friend – and saw bites up to 5cm long.Grant gave himself stitches using a first aid kit he kept in his vehicle for pig hunts. He and his friends then went to the Colac Bay Tavern, where he was given a bandage because he was dripping blood on the floor.
The stitching was finished off when he went to Invercargill hospital, where he was back at work on Monday.“It would have been great if I had killed it because there was a fishing competition on at the Colac Bay Tavern,” Grant told Stuff.co.nz. “I am pretty grateful to have my leg still,” he said. “When the stitches come out, I will be back in the water.”

Question 1 (2 points) Indicate whether the following statements are true or false and write down which part of the text justifies your answer.

a. The man who was attacked by the shark was treated by his friend.
b. is on the south of 's .
c. The shark was approximately 20cms in length
d. Grant realises how lucky he was in the attack.

Question 2 (2 points) Answer the following questions in your own words.

a. What do we find out about the shark from the text?
b. What did Grant do after the shark attack?

Question 3 (1.5 points) Find words or phrases in the text that correspond in meaning to the words and definitions given.

Question 4 (1.5 points) Complete the following sentences without changing the meaning.

'What is your opinion of dangerous sports and why do some people enjoy doing them?